The extent of resection remains an important aspect of the management of high-grade gliomas. Over the past decade there have been numerous studies supporting the role of an aggressive resection for high-grade gliomas when it is safe. This overarching strategy has been emphasized by all major neuro-oncology societies throughout the world. Therefore, why is it that many patients continue to just have a biopsy or less aggressive resection of their high-grade gliomas? The principle reason lies in the inability of the surgeon to detect the extent of tumor during the course of the resection. In most circumstances surgeons utilize their experience with color and consistency as the hallmark to guide the tumor resection. Unfortunately, many neurosurgeons in this country continue not to use navigation to guide the extent of resection, and intraoperative imaging is seldom utilized due to the expense of this methodology. In recent years a randomized, prospective study (Phase III trial) involving fluorescence-guided surgery with 5-aminolevulinic acid (5-ALA) confirmed that if the intent is to do an aggressive or even complete resection, then it is more readily accomplished using fluorescence-guided surgery than surgery guided by white light alone under the microscope.2

However, in the United States 5-ALA is not approved by the FDA and only a few investigators are able to use it by holding their own investigational new drug exemption. At the same time, other dyes have been utilized to try to enhance the extent of resection, namely indocyanine green and fluorescein. The limitations of indocyanine green primarily lie in its ability to stain tissue under white light, and, similar to fluorescein, it leaks out of tissue during the course of resection because (like fluorescein) it is not specifically taken up by tumor cells. Thus, the reliability of this technique has been somewhat less than optimal since it relies on a disrupted blood-brain barrier, and although this is typical for high-grade gliomas, these dyes will leak out of tissue once it is cut during the course of the tumor removal.

In this study the authors have been able to modify the timing of administration and use a specific YELLOW 560 module to make it easier to see the fluorescein without having to switch back and forth between white light and the filter apparatus on the microscope.1 By using this approach the authors were able to very nicely facilitate a more aggressive extent of resection with a high degree of specificity and sensitivity in terms of comparison to histological margins and the finding of fluorescence. It appears that the use of the specific yellow filter on the microscope also leads to better accuracy in terms of identifying tumor and can also result in a reduction of the fluorescein dosage. Thus, although this is a very small series of patients, it is clear that the use of intravenous fluorescein during the surgical removal of high-grade gliomas with the specific yellow filter may be a very reasonable, safe, and inexpensive way to achieve what is essential for patients with this disease—namely an aggressive, if not, complete, resection. Obviously, it is critical to proceed with a study that incorporates a control population using navigation alone or even in comparison with 5-ALA, and eventually it will be necessary to prove the utility of this technique with a prospective, randomized Phase III trial. That said, the authors are on the right track, and this is an exciting advance in the field of surgical neuro-oncology. 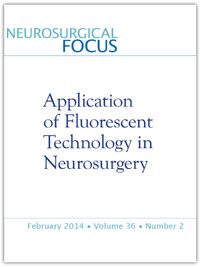