Percutaneous trigeminal tractotomy–nucleotomy with use of intraoperative computed tomography and general anesthesia: report of 2 cases 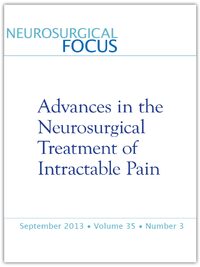 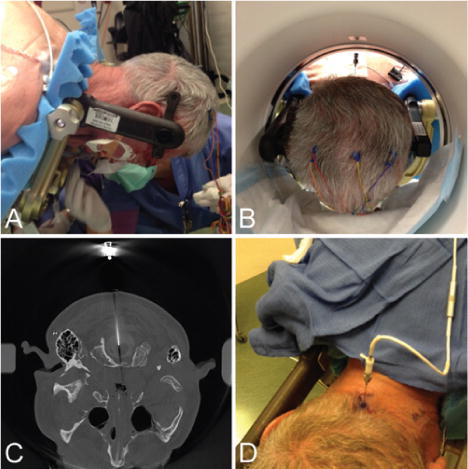 Case 1. Steps of a percutaneous trigeminal tractotomy–nucleotomy performed using intraoperative CT and general anesthesia. A: The patient is placed in rigid 3-point fixation in the prone position with the head flexed. The skull clamp is placed as inferiorly as possible to allow the plane of the CT scanner to reach C-2. B: The percutaneous needle is inserted 2 cm lateral to the midline between C-1 and the foramen magnum. Under CT guidance, it is directed to the trigeminal tract of the trigeminal nucleus, two-thirds of the distance from the midline to the equator of the spinal cord. C: The final position of the electrode tip is approximately 3 mm anterior to the dorsal surface of the cord and 6 mm lateral from the midline. D: Impedance is then assessed to ensure proper positioning of the electrode within the spinal cord, and 2 lesions are made.

Case 2. Positioning without using rigid 3-point fixation. Left: The patient is placed on chest rolls to enable head flexion on the NeuroLogica Scan Board. Right: The head is secured with tape, and the shoulders are gently held inferiorly to facilitate entry into the CereTom CT scanner and visualization down to C-2.