We are pleased to present this month's issue of Neurosurgical Focus, which is dedicated to MR-guided focused ultrasound (FUS) surgery, an entirely new technology that may well revolutionize the field of neurosurgery. Since the first human clinical trials were conducted using transcranial FUS treatments only a few years ago, there has been a surge in interest worldwide for the application of MR-guided, high-intensity FUS for the treatment of various disorders such as neurooncological disease, stroke, functional neurosurgical disorders, and many others to come.1 Diseases that were once thought to require treatment with invasive, neurosurgical operations may now be amenable to this noninvasive and precise intervention.

In this issue, we present a wide overview of potential applications for FUS surgery. Dr. Daniel Jeanmonod, who pioneered the first stereotactic FUS central lateral thalamotomies, presents his vast experience in the treatment of chronic neuropathic pain. His group also presents its approach to measuring the accuracy of FUS lesioning, which will be very important in years to come as other subcortical nuclei are targeted for functional lesioning. We are also very pleased to present a very novel concept of FUS technology to open the blood-brain barrier for the delivery of therapeutic agents in the treatment of brain tumors. There are many potential applications of FUS intervention in vascular disorders, and a very complete overview of sonothrombolysis for acute ischemic stroke is included as well as a review of the use of intravascular ultrasonography for diagnostic purposes.

Dr. Elias declares no conflict of interest. Dr. Kassell declares direct stock ownership with Insightec and a personal relationship with the FUS Foundation. 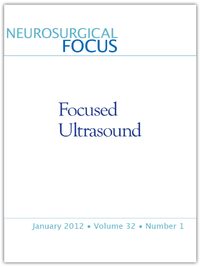