Colloid cysts of the third ventricle are uncommon lesions with a wide spectrum of natural histories. Most patients have an insidious course, as symptoms are mostly related to the development of hydrocephalus. Some patients present with sudden neurological deterioration, such as drop attacks, life-threatening acute hydrocephalus, and sudden death.5,6,9 The reported incidence is 3.2 per 100,000 population.9

A number of surgical approaches for symptomatic colloid cysts exist. Open microsurgical excision techniques offer control and gross-total resection, but they require a larger access corridor.2,6,9,13 Stereotactic aspiration or stereotactic-guided surgery has also been used.11,12,14 The endoscopic approach for excision of colloid cysts is relatively recent and offers the advantage of excellent visualization and a minimally invasive corridor through the naturally dilated ventricular system. A more controlled resection of the cyst is possible through this approach, avoiding damage to critical structures in the anterior third ventricle.

Complete endoscopic resection of a colloid cyst can be difficult, but near-total excision can be achieved even with a single port or with the use of conventional endoscopic techniques.3,7,8,14,17 During endoscopic resection, unforeseen situations can arise. We describe a case in which a large fragment of solid colloid was freely floating and eventually settled in the occipital horn, out of reach of the endoscopic catheters. Retrieval of the fragment would have at least required a second port if not conversion to open surgery. We chose to use a flexible nitinol stone retrieval basket, which is commonly used in urological procedures. This novel technique allowed for the retrieval of all fragments and ultimately resulted in complete resection of the cyst.

The 70-year-old man presented with progressive memory loss, urinary incontinence, and slowness of gait. A CT scan showed a large colloid cyst with hydrocephalus, which was confirmed on MR imaging (Fig. 1A). After discussing the various treatment options, the patient elected to undergo endoscopic resection of the colloid cyst.

The patient's head was placed in a Mayfield headholder, and frameless navigation was registered. The right frontal scalp was prepared and draped, and the skin incision was made in the usual fashion. A bur hole was then made just anterior to the coronal suture 3.5 cm off the midline. After the trajectory was determined using frameless navigation, we used the Gaab endoscope (Karl Storz GmbH) and cannulated the right frontal ventricle.

The ventricle was inspected, and we could see that the septum pellucidum was widely fenestrated. The colloid cyst was visible through the right Monro foramen, and there was significant hydrocephalus (Fig. 1B). Using the endoscopic bipolar cautery, we coagulated back the choroid plexus at the Monro foramen, increasing our exposure and visualization of the colloid cyst. We then used an Nd:YAG (neodymium-doped yttrium aluminum garnet) laser to perforate the colloid cyst capsule and create holes. It became clear that the content of the cyst was solid material (Fig. 1C).

We tried to aspirate cyst contents with the aid of a pediatric feeding tube that was fashioned into a suction cannula, but the material was too firm to be removed by suction. We then debulked the colloid cyst internally by using a combination of microcup forceps and alligator grasping forceps. Small fragments were removed, and periodically we stopped to irrigate the ventricles and the irrigation channel of the endoscope by using warm Ringer lactate solution.

Once we had debulked the central aspect of the cyst, we were able to grasp the capsule of the cyst and deliver it through the Monro foramen (Fig. 1D). Ultimately, the entire cyst could be rolled out from the Monro foramen, exposing a small vascular bundle leading to the cyst. This was coagulated with the endoscopic bipolar cautery and then cut with microscissors.

As the last cut on this small vascular stalk was made, the entire cyst contents with large fragments of solid colloid drifted down into the right occipital horn (Fig. 2A). With the endoscope angled backward in a posterior direction, the fragments were visible but not within reach of the grasping forceps due to the limited angulation the endoscope could achieve without causing harm to the brain parenchyma around the endoscope.

We then began to irrigate the ventricles, and this caused the colloid fragments to tumble in a circular fashion, breaking off pieces of colloid, which then came out of the irrigation exit port. We then used a 3 Fr Zero Tip Nitinol Stone Retrieval Basket (used for grasping of renal stones, Boston Scientific),16 which opens to an outer diameter of about 16 mm (Fig. 2B). We passed the basket down into the occipital horn of the ventricle and used the snare to grasp the remaining portions of the cyst until all of its contents had been removed (Fig. 2C–F). We then irrigated the ventricles until they were perfectly clear. The scope was then removed, and the scalp was closed after placing a ventricular drain down into the right frontal horn of the ventricle and tunneling it out through a separate stab incision.

We encountered the problem of a free-moving major fragment of the colloid cyst, resting due to gravity forces in the occipital horn of the lateral ventricle. Movement constraints and safety considerations allowed visualization of the cyst at the edge of the endoscopic field but not the use of conventional endoscopic instruments. We successfully used a flexible kidney stone basket that could be maneuvered in the ventricular system in an atraumatic fashion due to its rounded shape and flexible mounting shaft.

Patients with colloid cysts present with the classic triad of memory loss, gait abnormality, and incontinence, a symptom complex that can be indicative of normal-pressure hydrocephalus, which presents most often between the ages of 40 and 70 years.

The optimal surgical management of colloid cysts continues to be a matter of debate. Colloid cysts are benign lesions with a low risk of recurrence after radical resection. Open microsurgical excision was traditionally considered the gold standard treatment. However, operative approaches are not without risks. Of 38 patients in 1 series who underwent transcortical-transventricular resection of the colloid cyst, 30% had postoperative complications.6 The transcallosal approach avoids the risks of a cortical incision, but it is associated with complications that include cortical venous infarction, forniceal damage, injury to the deep venous system, subdural hematoma, disconnection syndromes, ventriculitis, and meningitis.1,2,9,14 Minimally invasive approaches sought to minimize the impact of surgery and include the stereotactic aspiration of the cyst contents.4 However, not all colloid cysts are suitable for aspiration, high viscosity of the cyst contents limit the complete evacuation of cyst contents, and the capsule is always left behind.11,12,15

The goal of a procedure should be to perform a radical excision of the lesion if safely possible, and, although some neuroendoscopists3,17 have advocated complete cyst wall excision to prevent cyst recurrence, the majority of patients with small residual remnants seem not to have a recurrence.7,8

Nitinol, a metal alloy of nickel and titanium, exhibits 2 related and unique properties: shape memory and superelasticity (also called pseudoelasticity), which, coupled with its physiological and chemical compatibility with the human body, have made it one of the most commonly used materials in medical device engineering and design.10 In the case of the stone basket retriever (Fig. 2A), it allows the prompt expansion of the basket from its sheath and the control of its size by partial resheathing. In its fully expanded form, the basket is atraumatic and can be safely maneuvered along the ependyma of the ventricle. Collapsed in its thin sheath, it can be inserted through the working side ports of the endoscope. We chose the Zero Tip Nitinol Stone Retrieval Basket over other available retrieval devices precisely for its lack of a leading tip that could potentially penetrate the ventricular wall and cause injury. In its expanded form, this device has no sharp edges impeding axial movements because it is made of nitinol, which is flexible enough to allow manipulation in the ventricular system.

We present a single case in which we achieved a complete resection of a colloid cyst using a completely endoscopic approach. With the innovative use of a flexible nitinol kidney stone retrieval basket, we were able to manage the problem of a free cyst fragment, which dislodged and settled in the occipital horn of the lateral ventricle and out of the reach of the straight rigid endoscopic instruments. We would like to think of this technique as an option that may become a useful part of the neurosurgeon's armamentarium as a salvage technique and for the retrieval of large cyst fragments in a planned fashion toward the end of the procedure.

Complete endoscopic resection may require a certain skill and the requisite learning curve. Multiple techniques that can be helpful have been described,3 and the neurosurgeon's armamentarium should include a variety of techniques to address issues that maybe encountered (for example, hardened cyst contents not amenable to suction as described in our case).

Remaining free-floating large colloid cyst fragments in the ventricular system do not necessarily require a second craniotomy or bur hole for access but may be retrieved using a kidney stone basket. More experience with this technique is required before advocating it as part of a planned resection strategy, but we believe that this is a low-risk technique that can save the patient from a second craniotomy or bur hole when used as a salvage strategy. 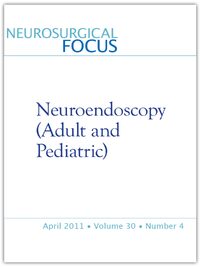 A and B: Axial (A) and coronal (B) T1-weighted Gd contrast-enhanced MR images demonstrating the colloid cyst situated in the third ventricle and concomitant hydrocephalus. C and D: Endoscopic views of the right Monro foramen (C) and the visible portion of the colloid cyst in the third ventricle (D). E: Endoscopic view showing penetration of the cyst wall using an Nd:YAG laser, creating multiple holes in the cyst wall. Manipulation of the cyst wall using a grasper is visible on the upper edge of the image.

A: Endoscopic view of the colloid cyst fragment in the occipital horn. B: Photograph of the self-expandable Zero Tip Nitinol Stone Retrieval Basket. C–F: Endoscopic views showing deployment of the nitinol basket in the lateral ventricle (C), engagement of the colloid cyst fragment (D), retrieval of the fragment in the lateral ventricle (E), and in the endoscope inserter (F). 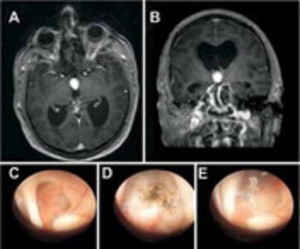 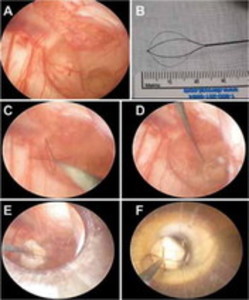