✓ Brain abscess is a rare but very dangerous neurosurgical lesion. Prompt diagnosis and emergency surgical evacuation are the hallmarks of therapy. Brain abscess following ischemic and hemorrhagic stroke is a rare entity. These cases are often preceded by episodes of bacteremia, sepsis, and local infection. The authors report the case of a 30-year-old woman who presented with a cerebral abscess at the site of a recent intraparenchymal hemorrhage.

✓ Brain abscess is a rare but very dangerous neurosurgical lesion. Prompt diagnosis and emergency surgical evacuation are the hallmarks of therapy. Brain abscess following ischemic and hemorrhagic stroke is a rare entity. These cases are often preceded by episodes of bacteremia, sepsis, and local infection. The authors report the case of a 30-year-old woman who presented with a cerebral abscess at the site of a recent intraparenchymal hemorrhage.

Intraparenchymal hemorrhage complicated by brain abscess is a very rare condition. We present such a case, in which the hemorrhage was thought to be secondary to vasculitis. The difficulty in diagnosis and the theories about the origins of this phenomenon are discussed.

This patient, a 30-year-old woman, presented with sudden-onset lethargy, aphasia, and right-sided weakness. Her medical history was noncontributory, whereas her social history was significant for 1 pack per day of cigarettes and for alcohol abuse. The patient's blood pressure was 130/75 on admission, and her temperature was 37.4°C. The white blood cell count, platelets, and results of coagulation studies were in the normal range. Results of urine toxicology studies were negative.

Admission CT scans of the head revealed a large left basal ganglia intraparenchymal hemorrhage (Fig. 1). Results of an MR image of the brain were consistent with a left basal ganglia hemorrhage without abnormal enhancement. Four-vessel cerebral angiography was performed to rule out an underlying arteriovenous malformation. The angiogram revealed several foci of narrowing in bilateral anterior cerebral artery and middle cerebral artery distributions, which was consistent with vasculitis (Fig. 2). The angiogram demonstrated no other vascular abnormalities.

The patient was treated conservatively with supportive care. She was in stable condition and was transferred out of the intensive care unit on posthemorrhage Day 8. She had moderate hemiparesis and mild aphasia at that time. Because of the angiographic evidence of vasculitis, the decision was made to confirm this finding by performing a meningeal and brain biopsy on posthemorrhage Day 10, which was done through a right frontal craniotomy. Specimens of right frontal dura mater as well as cerebral cortex with the overlying meninges were sent for pathological analysis. Pathological findings were consistent with nonspecific changes, with microglial activation, and without definite evidence for vasculitis.

The patient made a slow but progressive improvement in her mental status and right-sided weakness. She was discharged to an acute rehabilitation facility 1 week later. She returned to the hospital 30 days after her intraparenchymal hemorrhage with new onset of seizure followed by a decreased level of consciousness. Before this event, she had been following basic commands with right hemiparesis. A follow-up CT scan of the head revealed a large hypodense lesion in the left basal ganglia with significant surrounding edema (Fig. 3A). The MR imaging of the brain was repeated, and showed interval development of a well-defined, large left hemispheric and brainstem ring-enhancing lesion (Fig. 3B). There was significant surrounding vasogenic edema, with mass effect and midline shift (Fig. 3C). The appearance of the lesion was highly suggestive of cerebral abscess.

Due to these findings, the patient was taken to the operating room for emergency treatment, and a left frontal craniotomy was performed for evacuation of the lesion. Because of obstructive hydrocephalus, a right frontal ventriculostomy was placed at the same time. A large amount of frank pus was drained. Cultures of this material grew nonlactose fermenting, gram-negative rod bacteria. Final speciation was consistent with Citrobacter koseri. Transesophageal echocardiograms showed no signs of infective endocarditis. The right frontal ventriculostomy could not be discontinued, and it was eventually converted to a right frontal ventriculoperitoneal shunt. The patient was treated with an 8-week regimen of intravenous cefepime. The CT scans of the head were repeated, and they showed complete resolution of the abscess (Fig. 4). She was eventually discharged to an inpatient rehabilitation facility. At her last follow-up visit 1 year after the hemorrhage, she was doing well but had moderate right hemiparesis.

Brain abscess is a rare but extremely dangerous neurosurgical lesion. Prompt diagnosis and emergency surgical evacuation are the hallmarks of therapy. Brain abscess is most commonly encountered in the settings of hematogenous spread from a distal focus of infection. Other routes of infection are iatrogenic (that is, postsurgical) or contiguous spread from infected paranasal sinus or dental infection.2,6,9–12,18,20 Absence of a clear source of infection is reported in as many as 40% of cases.14,15

Brain abscess following ischemic and hemorrhagic stroke is a rare entity. These cases are often preceded by episodes of bacteremia, sepsis, and local infection.5,7,8,16 Abscess formation after intracranial hemorrhage seems to occur mostly via the hematogenous route. This is a likely scenario in our reported case. To our knowledge, a case of intraparenchymal hemorrhage secondary to vasculitis has not been previously reported. It is important to note, however, that the diagnosis of vasculitis was made based on convincing angiographic evidence. Brain biopsy, which is the gold standard test, did not confirm this diagnosis. It is possible that the negative results of brain biopsy were due to sampling error. It is also possible that the appearance of vasculitis on the angiogram was the sequela and not the cause; the dilations in the vasculature may have represented mycotic aneurysms.

Vasculitis consists of granulomatous inflammation and fibrinoid necrosis, which cause disruption of leptomeningeal and parenchymal arteries and veins and potentially lead to hemorrhages. After cerebral hemorrhage, it is thought that the surrounding brain becomes increasingly fragile secondary to breakdown of the BBB. Development of perihematoma edema may involve damage to the vascular endothelium. Iron is a catalyst for lipid peroxidation, and the progressive release of iron from the breakdown of hemoglobin resulting from erythrocyte lysis may contribute to BBB dysfunction. Oxyhemoglobin induced apoptosis through free radical damage to endothelial wall tissue.7 The disruption of the BBB may predispose the brain to abscess formation.

An alternative scenario is that our patient's original intraparenchymal hemorrhage was secondary to a preexisting abscess. There have been a handful of reports of hemorrhage from a brain abscess in the literature.1,3,4,13,17,19,21 It has been postulated that intraparenchymal hemorrhage may occur secondary to breakdown of the neovascularization of the abscess cyst wall. In this case, it seems plausible that the blood clot could have hidden evidence of the underlying abscess on the imaging studies, including the contrast-enhanced MR image of the brain. Thus, undetected and untreated, the abscess became very large and symptomatic 1 month later, as seen in Fig. 3.

In any case, the possibility of a brain abscess should be taken into consideration following intracerebral hemorrhage when clinical and radiological behavior diverge from the expected course. Brain abscess has a mortality rate of up to 10%, and prompt management with drainage and systemic antibiotics is essential to achieve a favorable outcome.14 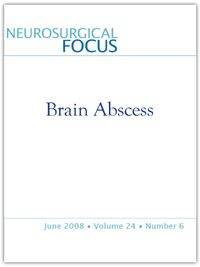 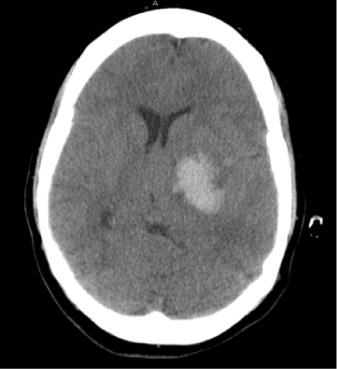 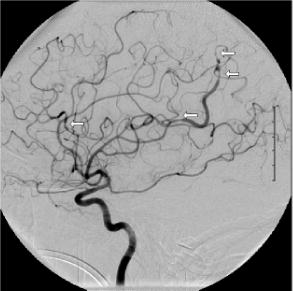 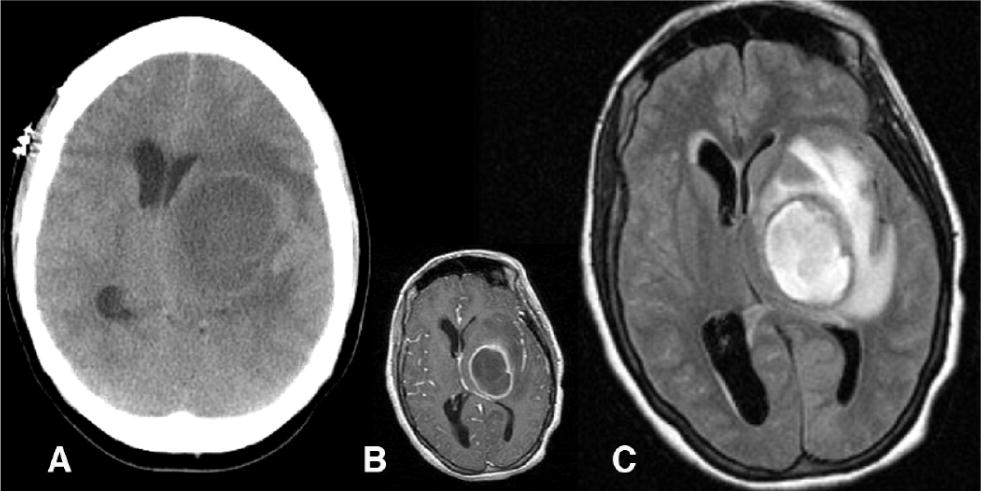 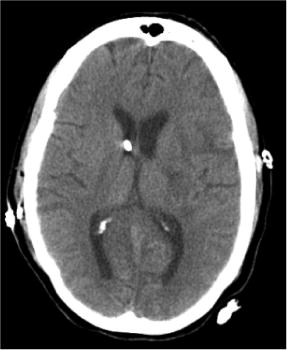