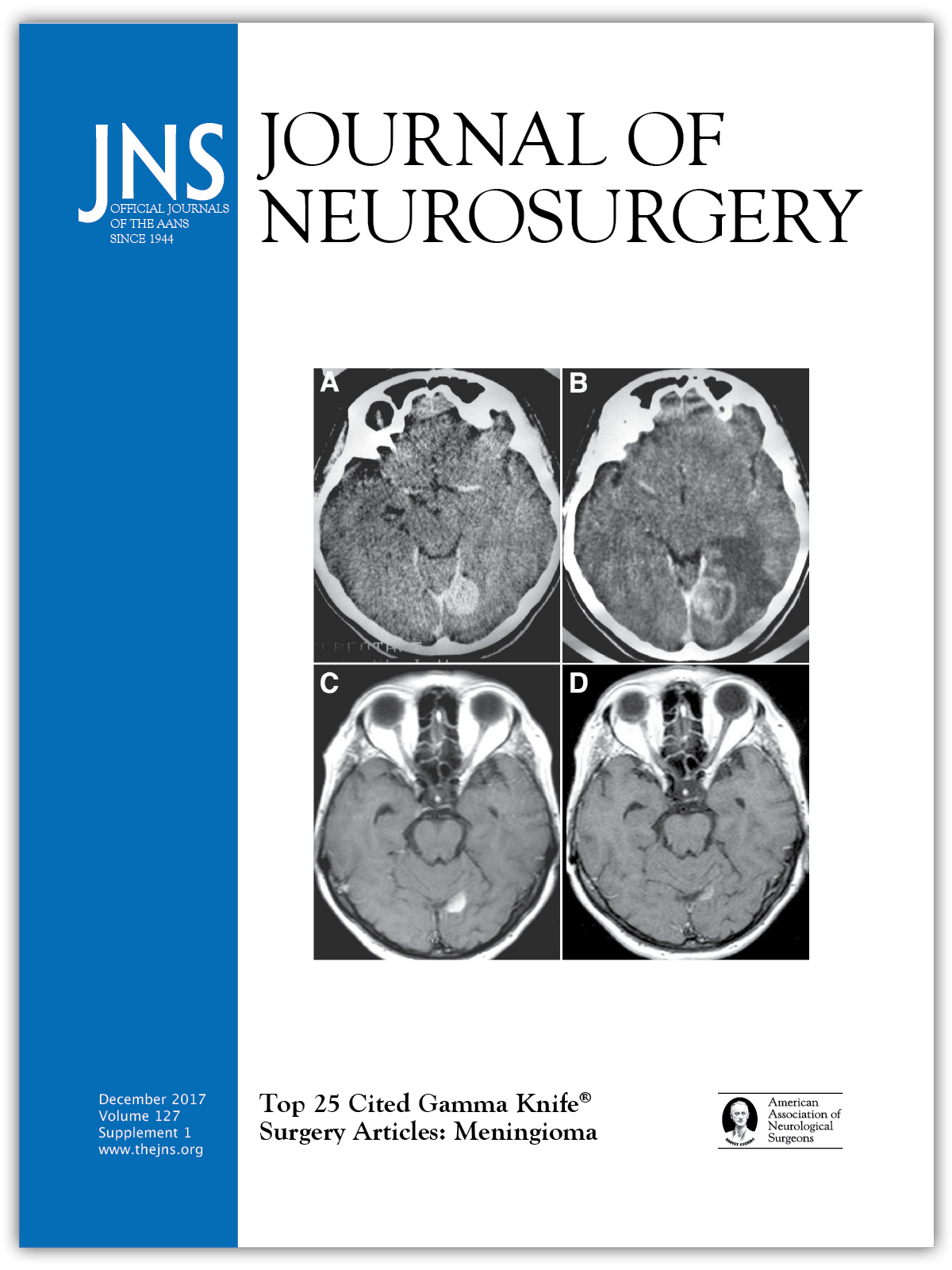 Object. The long-term outcome of stereotactic radiosurgery for cavernous sinus (CS) meningiomas is not fully understood. The authors retrospectively reviewed their experience with 40 CS meningiomas treated with gamma knife radiosurgery.

Methods. Follow-up periods for the 40 patients ranged from 12 to 123 months (median 42 months), and the overall tumor control rates were 86.4% at 3 years and 82.3% at 10 years. Factors associated with tumor recurrence in univariate analysis were histological malignancy (p < 0.0001), partial treatment (p < 0.0001), suprasellar tumor extension (p = 0.0201), or extension in more than three directions outside the CS (p = 0.0345). When the tumor was completely covered with a dose to the margin that was higher than 14 Gy (Group A, 22 patients), no patient showed recurrence within the median follow-up period of 37 months. On the other hand, when a part of the tumor was treated with 10 to 12 Gy (Group B, 15 patients) or did not receive radiation therapy (Group C, three patients), the recurrence rates were 20% and 100%, respectively. Neurological deterioration was seen in nine patients, but all symptoms were transient or very mild.

Conclusions. The data indicate that stereotactic radiosurgery can control tumor growth if the whole mass can be irradiated by dosages of more than 14 Gy. When optimal radiosurgical planning is not feasible because of a tumor's large size, irregular shape, or proximity to visual pathways, use of limited surgical resection before radiosurgery is the best option and should provide sufficient long-term tumor control with minimal complications.

Risk of injury to cranial nerves after gamma knife radiosurgery for skull base meningiomas: experience in 88 patients

Object. In this study the authors sought to determine the neurological risks and potential clinical benefits of gamma knife radiosurgery for skull base meningiomas.

Methods. A consecutive series of 88 patients harboring skull base meningiomas were treated between 1990 and 1996 by using the Leksell gamma knife in a prospective clinical study that included a strict dose—volume protocol. Forty-nine patients had previously undergone surgery, and six had received external-beam radiotherapy. The median treatment volume was 10 cm3, and the median dose to the tumor margin was 16 Gy. The radiosurgical dosage to the optic nerve, the cavernous sinus, and Meckel's cave was calculated and correlated with clinical outcome. The median patient follow-up time was 35 months (range 12–83 months).

Conclusions. Gamma knife radiosurgery appeared to be an effective method to control the growth of most skull base meningiomas in this intermediate-term study. The risk of trigeminal neuropathy seemed to be associated with doses of more than 19 Gy, and the optic apparatus appeared to tolerate doses greater than 10 Gy. Considering the risks to cranial nerves associated with open surgery for comparable tumors, the authors believe that gamma knife radiosurgery is a useful method for the management of properly selected recurrent, residual, or newly diagnosed skull base meningiomas.