Primary intracranial smooth muscle tumors are often misdiagnosed as meningiomas due to their similar appearance on imaging. PILMSs have a poor prognosis and gross total resection is the mainstay of treatment in the absence of clear recommendations for management. Prompt diagnosis and resection are important; therefore, these tumors should be included in the differential of dura-based tumors, especially among immunocompromised patients. Although EBV-associated PILMSs usually occur in immunocompromised individuals, their presence cannot be ruled out in immunocompetent patients.

Primary intracranial smooth muscle tumors are often misdiagnosed as meningiomas due to their similar appearance on imaging. PILMSs have a poor prognosis and gross total resection is the mainstay of treatment in the absence of clear recommendations for management. Prompt diagnosis and resection are important; therefore, these tumors should be included in the differential of dura-based tumors, especially among immunocompromised patients. Although EBV-associated PILMSs usually occur in immunocompromised individuals, their presence cannot be ruled out in immunocompetent patients.

Leiomyosarcoma (LMS) is an extremely rare form of cancer that arises from smooth muscle cells and represents 10%–20% of soft tissue sarcomas.1,2 Primary intracranial LMS (PILMS) is an even more obscure entity and has been reported to make up less than 1% of tumor specimens (3 of 25,000 brain tumors).3 They can arise from the pluripotent mesenchymal stem cells in the dura mater and smooth muscle cells of the cerebral blood vessels.4–6 The majority of intracranial LMS cases represent metastasis of primary tumors from the gastrointestinal tract or female reproductive system and are frequently mistaken for other primary brain neoplasms, such as meningiomas, based on their appearance on preoperative imaging.4 There is an association between Epstein-Barr virus (EBV) and the development of well-differentiated smooth muscle tumors, including PILMSs, although the pathogenesis is not well described.7,8 Previous cases of primary intracranial EBV smooth muscle tumors have been described in immunocompromised patients with human immunodeficiency virus (HIV) or following organ/stem cell transplantation.9–13 Only 1 case has been reported in a seemingly immunocompetent patient diagnosed with Hodgkin lymphoma.14 To the best of our knowledge, no cases of PILMS have been reported in immunocompetent patients.15 We present the first case of an EBV-associated PILMS in an immunocompetent adult.

Two years prior to presentation, a previously healthy, 40-year-old, right-handed male began having left-sided headaches exacerbated by urination and bowel movements, as well as nausea and vomiting. No brain imaging was done at the time. He was prescribed nortriptyline, which initially relieved his headaches; however, 1 month prior to surgery he began having worsening headaches, intermittent blurry vision, word-finding difficulties, and hearing loss over the course of 1 month. Magnetic resonance imaging (MRI) of the brain demonstrated a large, heterogeneously enhancing, lobulated, dura-based mass arising from the left middle cranial fossa with associated left temporal lobe vasogenic edema causing considerable mass effect, severe left uncal herniation, and mesencephalic compression (Fig. 1). He was subsequently referred to Neurosurgery for further management of his presumed meningioma. He was started on Keppra (UCB, Inc.) 750 mg twice a day, given a complaint of unpleasant epigastric sensations believed to be seizures, and surgical resection was recommended.

A diagnostic cerebral angiogram was performed for preoperative planning and demonstrated a highly vascular tumor predominantly supplied by a hypertrophied left petrosal branch of the left middle meningeal artery and superior deflection of the middle cerebral artery by the tumor. A lumbar drain was placed perioperatively for cerebrospinal fluid drainage to minimize brain retraction. The patient underwent a left frontotemporal craniotomy and anterior skull base approach. Gross-total resection (GTR) was achieved without any intraoperative complications (Fig. 2).

Histopathological evaluation demonstrated a non-meningothelial mesenchymal tumor with extensive smooth muscle differentiation composed of intersecting fascicles of spindled cells with ample eosinophilic cytoplasm, elongated blunt-ended nuclei, and mild cytological atypia (Fig. 3). There was sparse mitotic activity, and necrosis was not present. Prominent infiltration of small CD3-positive lymphocytes and plasma cells was seen. Immunostaining showed that the tumor cells were strongly positive for smooth muscle actin (SMA) and h-caldesmon, with focal positive staining for desmin and epithelial membrane antigen (EMA) (Fig. 4). EBV-encoded small RNA (EBER) in situ hybridization was strongly positive throughout the tumor. Tumor cells were negative for STAT6, ALK, myogenin, CD34, neurofilament, the progesterone receptor, and SSTR2a. The Ki-67 proliferation index was estimated at < 4%. The final diagnosis determined by pathology was a well-differentiated LMS, grade 1, with associated EBV positivity. Whole-exome sequencing was performed and unrevealing as this molecular approach was limited to the detection of coding somatic mutations and unable to detect fusion events more typically associated with sarcomas.

Given the relationship of EBV-associated PILMS with immunocompromised states described in the literature, the patient underwent a comprehensive panel of tests, which detected no evidence of immunodeficiency. HIV-1 and -2 antibody and HIV-1 antigen screens were negative. The patient was positive for antinuclear antibody (ANA) and has a family history of rheumatologic disease, although no autoimmune diagnosis was made.

PILMSs are extremely rare, malignant tumors that are reported to make up approximately 0.1% of all intracranial tumors.11 The tumorigenesis of PILMS is unclear, and tumors are thought to arise from the pluripotent mesenchymal cells of the dura mater or cerebral blood vessel epithelium, although the majority of the evidence suggests dural origin.11,16 The clinical presentation of PILMS varies with tumor location, but common symptoms include headache, limb weakness, vomiting, and vision changes.17 PILMSs have a poor overall prognosis and high rates of local recurrence and metastases.16,17 However, EBV-associated PILMSs have a better prognosis compared with sporadic PILMSs, and the degree of immunocompetency correlates with aggressiveness.15 Zhang et al.17 reported the progression-free survival (PFS) of PILMS to be 58.2 ± 10.5 months, with a recurrence rate of 72.8% and 44.9% at 1 and 5 years, respectively. The mean overall survival (OS) time was 68.4 ± 11.1 months, and the 1- and 5-year OS rates were 91.9% and 49.9%, respectively.

PILMS occurs more commonly in immunocompromised patients with HIV or EBV infection, genetic disorders, malignancies, radiation exposure, organ transplantation, and in children. The majority of EBV-related PILMSs have been reported in children with HIV or other immune-deficient states18,19; however, there have been cases described in adults as well.14 A main contributor to the development of PILMS is coinfection with EBV in patients with HIV; however, it remains unclear how the pathogenesis of PILMS is affected by EBV-transformed and infected smooth muscle cells.16 Although there have been cases of PILMS reported in immunocompetent patients,20–23 EBV-associated PILMSs have only been reported in immunocompromised patients, with the exception of this case (Table 1).9–12,14

Given that PILMSs are very rare and frequently originate from the dura, they tend to be misdiagnosed as meningiomas.23 Further, on frozen section, intraoperative tumor samples are difficult to distinguish from meningiomas; therefore, immunostaining is often necessary to confirm the diagnosis of LMS. Although it is difficult to preoperatively diagnose PILMS, there are some radiographic features that can help identify them as part of the differential diagnosis. One review found that PILMSs are usually solitary tumors that can be found extra- or intra-axially. When the former, they tend to present as well-circumscribed dura-based tumors in the sellar, parasellar, cerebellopontine angle, or cavernous sinus regions. They are typically homogeneous and hypointense or isointense on T1-weighted MRI. On T2-weighted MRI they tend to be isointense to hyperintense with equal homogenous enhancement and may present with or without a dural tail, often resembling a meningioma.23

Due to its low prevalence, there is no standard treatment for PILMS,17 but similar to meningiomas, maximal safe resection is important. Treatment is tailored on a case-by-case basis dependent on the size and location of the tumor and often requires a multidisciplinary approach.23 Previous cases report multimodal treatment, which includes surgery, radiotherapy, and/or chemotherapy.14,24 GTR is preferred, when feasible, as it is associated with significantly better PFS and OS.15,17 In the same study, adjuvant radiotherapy demonstrated better OS only at the trend level but was not otherwise significant.17 Chemotherapy has been used for PILMS in the past and includes agents such as doxorubicin, ifosfamide, gemcitabine, cyclophosphamide, docetaxel, and temozolomide.13 Although the effectiveness of chemotherapy for PILMS remains poorly elucidated, 1 study showed that, in their cohort, out of the 5 patients who developed distant metastases after resection of their PILMS, 4 did not receive chemotherapy.17

PILMSs are extremely rare tumors typically seen in the immunocompromised population. Although EBV has been linked to PILMS and poor immune status is believed to be a key contributor to their development, the exact pathogenesis is still unknown. Primary intracranial smooth muscle tumors are often misdiagnosed as meningiomas due to their similar radiographic appearance. PILMSs have a poor prognosis and GTR is the mainstay of treatment in the absence of clear recommendations for management. Prompt diagnosis and resection are important for these rare tumors. Therefore, primary intracranial smooth muscle tumors should be included in the differential diagnosis when evaluating a dura-based tumor, especially in immunocompromised patients. In cases of EBV-associated PILMS in seemingly immunocompetent patients, immunological panels are warranted to uncover any underlying immunodeficiency. Despite their strong association with immunodeficiency, EBV-associated PILMSs may occur in immunocompetent patients, highlighting the need to further elucidate the pathogenesis of these tumors.

Coronal T1-weighted MRI with gadolinium (A) and axial T2-weighted MRI (B) demonstrate an avidly enhancing mass measuring 5.8 × 5.5 × 4.4 cm (anteroposterior × transverse × craniocaudal). There is a central area of hypo-enhancement compatible with necrosis, mass effect on the temporal lobe and brainstem, and a 7-mm rightward midline shift. Axial (C) and three-dimensional (D) reconstruction of CT angiography demonstrates hypervascularity of the tumor as well as an association with the left middle cerebral artery.

Intraoperative photograph demonstrates resection cavity after GTR of the lesion using a left frontotemporal craniotomy with removal of the sphenoid wing and drilling of the anterior clinoid. The large tumor was abutting the ipsilateral frontal (F) and temporal (T) lobes and was entering the sylvian fissure (*). A major arterial feeder along the base of the middle fossa supplied the tumor, and the intraoperative photograph shows the result of its coagulation (arrow). Doing so early in the surgery allowed for maximal safe resection with minimal blood loss and brain manipulation.

Photomicrographs of the tumor with hematoxylin and eosin (H&E) staining (A and B) demonstrate a non-meningothelial mesenchymal tumor with extensive smooth muscle differentiation. The tumor is composed of intersecting fascicles of spindle cells with ample eosinophilic cytoplasm, elongated blunt-ended nuclei, and mild cytological atypia. Prominent lymphocytic infiltrates composed primarily of T cells were present focally (B). Original magnification ×100 (A) and × 200 (B). 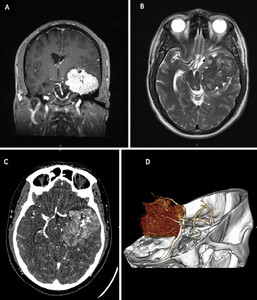 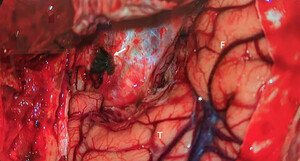