Disseminated blastomycosis with an intracranial fungoma in an immunocompetent patient: illustrative case

Blastomyces dermatitidis is a fungus endemic to central and southern North America. While infection most commonly results in pneumonia, a small number of infections progress to systemic disease, which may include intracranial lesions. Progression to systemic disease is most common in immunocompromised patients, such as those with human immunodeficiency virus.

The authors present a 44-year-old immunocompetent male who presented following a tonic-clonic seizure. Initial workup revealed a 19-mm enhancing intracranial mass. There was avid uptake of fluorescein sodium, and an en bloc resection of the mass was performed. Histopathology revealed B. dermatitidis. Medical management included amphotericin B and azole therapy. Postoperative recovery was uneventful, and no focal neurological deficits were appreciated.

Blastomyces dermatitidis is a fungus endemic to central and southern North America. While infection most commonly results in pneumonia, a small number of infections progress to systemic disease, which may include intracranial lesions. Progression to systemic disease is most common in immunocompromised patients, such as those with human immunodeficiency virus.

The authors present a 44-year-old immunocompetent male who presented following a tonic-clonic seizure. Initial workup revealed a 19-mm enhancing intracranial mass. There was avid uptake of fluorescein sodium, and an en bloc resection of the mass was performed. Histopathology revealed B. dermatitidis. Medical management included amphotericin B and azole therapy. Postoperative recovery was uneventful, and no focal neurological deficits were appreciated.

Blastomyces dermatitidis is a dimorphic fungus endemic to central and southern North America,1 for which epidemiological patterns are not fully elucidated.2 Infection most commonly results in pneumonia but can infect the skin, bones, and the genitourinary tract.1 In 5%–10% of cases, Blastomyces can involve the central nervous system (CNS), leading to meningitis, intracranial abscesses, seizures, and altered mental status, predominantly in immunocompromised patients.3 Utilizing contrast-enhanced computed tomography (CT) or magnetic resonance imaging (MRI), CNS abscesses can mimic metastasis or primary glioma due to their ring-enhancing profile.4–6 Mimicry can lead to delays in diagnosis and treatment, which were significantly associated with death in a prior study.7 There is a paucity of data available for the management of intracranial Blastomyces in immunocompetent patients. Here we report a case of disseminated blastomycosis with CNS involvement in an immunocompetent male managed with resection.

A 44-year-old male presented with no notable past medical history. He denied drug use, reported frequent work outdoors, and was negative for human immunodeficiency virus (HIV). He had presented to an outside emergency department following a new-onset witnessed generalized tonic-clonic seizure with loss of consciousness lasting 30 seconds followed by up to 15 minutes of postictal confusion. CT of the brain at an outside hospital demonstrated an 18-mm hyperdense, hemorrhagic lesion in the left frontal lobe with significant vasogenic edema. Upon transfer to our community hospital, he was started on steroids and seizure prophylaxis. Mild head pain without notable neurological deficits was noted on physical examination. The electroencephalogram was normal. MRI of the brain demonstrated a heterogeneously enhancing mass centered within the left frontal lobe measuring 17 mm anterior-posterior × 19 mm transverse × 19 mm cranial-caudal and mild central diffusion restriction (Fig. 1A). Extensive vasogenic edema was present without significant midline shift or acute hydrocephalus. CT of the chest and abdomen demonstrated predominant ground-glass nodularity bilaterally, splenomegaly, medial hypo-enhancing splenic lesion, and peripherally enhancing lesion in gluteal subcutaneous fat.

He was started on fluconazole for fungal coverage while a definitive diagnosis could be made. Cryptococcal and histoplasma antigens were confirmed negative with Karius digital culture. Blastomyces was also detected on Karius digital culture (65 DNA particles/μL). Initial Blastomyces antigen was >20.0 ng/mL (Fig. 3). Following diagnosis, intravenous (IV) amphotericin B was added to the treatment regime. A lumbar puncture was not recommended due to cerebral edema. Upon discharge, he received daily outpatient IV liposomal amphotericin B for 4 weeks. Due to declining renal function, he was switched to oral voriconazole. At the last follow-up, he was without neurological deficits and continued to take oral voriconazole (Fig. 1C).

Here, we present an immunocompetent male patient with disseminated blastomycosis managed aggressively with gross total resection and subsequent antifungal therapy. This case adds to the small body of literature on CNS blastomycosis and sheds light on the neurosurgical management of the disease. A systematic search was performed to identify cases of intracranial fungomas due to Blastomyces in immunocompetent patients, and 2 authors independently reviewed articles for inclusion (Fig. 4). We considered patients immunocompetent if they were HIV-negative and did not have significant chronic diseases.

CNS Blastomyces has been previously reported in case reports and small, retrospective studies3,4,6,8,9 (Table 1). Neurological symptoms and enhancing lesions on brain MRI were common.4–6 In our case and those presented by Slomka and Doub4 and Munich et al.,6 a solitary enhancing lesion was appreciated; however, Goico et al.9 presented a case in which several small enhancing lesions were appreciated indicating the presentation can vary substantially. Despite the variability between intraparenchymal and leptomeningeal lesions, MRI provides better diagnostic utility given the various reports of CT-negative findings in patients with confirmed intracranial Blastomyces.10 The diagnostic utility of other MRI modalities has also been explored in limited studies, notably MR spectroscopy, which has shown trehalose peaks consistent with the presence of other intracranial fungomas.10

Review of cases in the literature

Diagnosis of disseminated Blastomyces, both extracranially and intracranially, can be made by direct lesion biopsy,3,4,6,8 culture of cerebrospinal fluid,3,8 blood, or bronchoalveolar lavage fluid,9 and testing for antigen presence in the blood. Whether intracranial or extracranial, the isolation of Blastomyces spp. in culture is considered definitive. Histopathology and cytology can also be diagnostic by demonstrating thick-walled yeasts with a single daughter cell attached with a broad base. Antibody testing, namely with the BAD-1 marker, has also been used to supplement diagnosis, with an 88% sensitivity and 99% specificity. Antigen testing and polymerase chain reaction studies are still experimental, with large studies needing to validate their diagnostic efficacy.11

Neurosurgical management was scarcely reported. Slomka and Doub4 and Munich et al.6 describe 2 cases in which the fungal mass or abscess was resected, while Bush et al.3 and Bariola et al.8 describe cases where a brain biopsy was performed. In cases where resection occurred, all patients were in remission at the last known follow-up. Similarly, surviving patients without resection are in remission. Previous reporting of intracranial fungal granulomas, predominantly aspergillosis, suggests that mortality has decreased in recent years: Naik et al.12 reported a mortality rate of 36.3%, while Lin et al.13 reported 88.1% mortality, which may be due to improvements in surgical management and antifungal medications. In Naik et al.,12 radical excision of intracranial fungomas followed by antifungal therapy was performed in nearly all cases, and complications included infarcts, cavernous sinus thrombosis, meningoencephalitis, and ventriculitis. Additionally, meningoencephalitis is a common cause of death,12,14 and recurrence of fungomas is noted in multiple cases.12 Antifungal therapy commonly included formulations of amphotericin B and azoles (Table 1). In 2008, the Infectious Diseases Society of America issued guidelines for managing Blastomyces, including cases of systemic infiltration.10 Itraconazole, fluconazole, and voriconazole were included equivocally in their recommendations, although, more recently, studies have demonstrated the utility of voriconazole over other formulations for CNS dissemination of fungal infections due to improved CNS penetration of the medication.15

In this case, gross total resection of the fungoma was performed. The patient had an uncomplicated recovery, and the fungoma has not recurred. However, too few cases are reported to suggest that neurosurgical intervention for blastomycosis improves outcomes. Blastomycosis may be considered as a differential diagnosis in areas where the fungus is endemic and when the patient is immunocompromised, has respiratory symptoms, or works outdoors. While more common in immunocompromised patients, CNS blastomycosis should not be dismissed based on immunocompetency. 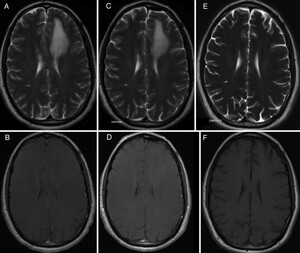 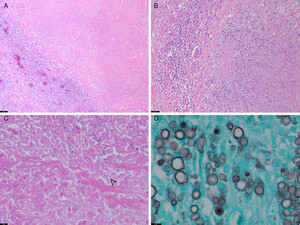 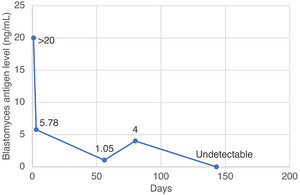 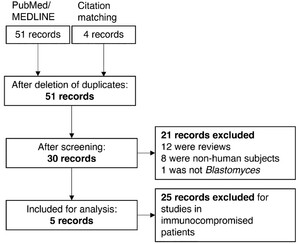