A teenage boy who had been stabbed in the neck presented with an extracranial traumatic functional carotid artery occlusion that could not be crossed in an antegrade fashion. Endovascular repair depends on obtaining catheter access proximal and distal to an injury within the true lumen.

A teenage boy who had been stabbed in the neck presented with an extracranial traumatic functional carotid artery occlusion that could not be crossed in an antegrade fashion. Endovascular repair depends on obtaining catheter access proximal and distal to an injury within the true lumen.

Penetrating injury to the cervical carotid arteries and jugular veins is relatively common. Although endovascular repair is minimally invasive and is therefore often preferred to open repair, successful endovascular treatment of penetrating vascular injury depends on obtaining catheter access proximal and distal to the injury within the true lumen. The “flossing” technique is a method of treating peripheral arterial lesions that cannot be crossed in an antegrade fashion or with subintimal technique.1–3 However, use of this technique for the management of cervical vascular injuries has not been reported. We present the use of the flossing technique to treat a cervical stab wound in which access to the true lumen could not be obtained in an antegrade fashion.

A teenage boy was transferred to our center after suffering a single knife stab wound to the left neck. The patient was intubated prior to arrival due to airway compromise and decreased level of consciousness. On arrival, there was no evidence of active hemorrhage in the cervical area; however, he had suffered a significant blood loss and was somewhat hemodynamically unstable. He was successfully resuscitated and stabilized in the trauma bay; a neck computed tomography angiogram was obtained, which demonstrated injury to the left internal carotid artery (ICA) at the level of C2 with a traumatic arteriovenous fistula (AVF) involving the adjacent internal jugular vein (IJV).

The patient was taken to the neurointerventional suite and received diagnostic cerebral angiography. This study demonstrated a fistulous connection between the left ICA and the IJV, with flow of contrast in a cephalad direction within the venous system and a complete occlusion of the ICA (Fig. 1). Collateral circulation was provided to the left anterior circulation territory by the vertebrobasilar system via the left posterior communicating artery (Fig. 2). The patient was next admitted to the neurosciences intensive care unit and was given a loading dose of aspirin and clopidogrel in anticipation of later endovascular repair via stenting. He was brought back to the angiography suite several hours later for definitive treatment.

Under general anesthesia, an 8-Fr sheath was placed in the right common femoral artery and a 6-Fr Cook shuttle was positioned within the distal left common carotid artery. Although numerous attempts were then made to obtain endovascular access to the ICA distal to the occlusion by advancing a microcatheter and microwire through the occlusion, a dissection flap in the ICA prevented antegrade navigation through the occluded segment.

An alternative plan was then formulated in which retrograde navigation within the ICA distal to the occlusion would be attempted in the hope that successful navigation past the dissection flap would be feasible by coming from the opposite direction. A sheath was then placed in the left femoral artery, and a second guide catheter (Benchmark, Penumbra) was positioned in the left vertebral artery. A 0.014-in Aristotle soft wire (Scientia Vascular) and SL-10 microcatheter (Stryker Neurovascular) were advanced from the vertebrobasilar system through the left posterior communicating artery and into the left carotid siphon. The occluded left ICA was successfully crossed using this retrograde approach. Microcatheter angiography was performed in the left carotid artery to confirm that the devices were positioned within the true lumen (Fig. 3).

The antegrade Aristotle wire was too slippery to be successfully engaged by the snare. As an alternative, from an antegrade approach, a 0.014-in Transcend wire (Stryker Neurovascular) was placed adjacent to the snare device. The Transcend wire has a relatively abrasive surface, which permits grasping with the snare. The Transcend wire was captured and gently pulled into the petrous segment of the ICA (Fig. 4). There was a brief, transient episode of bradycardia during this maneuver, likely due to a vasovagal response.

With the antegrade SL-10 positioned above the occlusion, the Transcend microwire was removed and replaced with a 0.014-in Mailman guidewire (Boston Scientific). The SL-10 was removed over the wire. A 5 × 50-mm covered stent (Viabahn, Gore) was then advanced over the Mailman microwire and deployed, resulting in repair of the ICA dissection and resolution of the AVF (Fig. 5).

After the procedures, the patient regained consciousness and was found to have right hemiparesis. Brain magnetic resonance imaging performed 10 days after admission showed a subacute infarct of the left posterior middle cerebral artery territory; it is unclear if the stroke occurred before or after the procedure because a detailed neurological examination was precluded by heavy sedation and resuscitative efforts. The patient was discharged to a rehabilitation center after 17 days in the hospital. At the follow-up 15 months after injury, he had made a near-complete recovery with some residual reduced sensation in the right upper extremity and had resumed his education.

In peripheral vascular disease, combined anterograde and retrograde approaches are an established technique for reopening chronically occluded arteries.4 In contrast, there are few reports of combined antegrade and retrograde approaches (i.e., flossing technique) in the cerebrovascular space.5,6 The technique presented in this report offers an alternative approach for establishing intraluminal endovascular access in select cases in which antegrade navigation is not feasible.

Acquired carotid to jugular vein fistulas are rare and account for 4% of all traumatic AVFs. They are so rare that they are usually only published as case reports. There were 24 published cases from 2000 to 2012. Of those 24 cases, 11 were treated with open surgery and 7 were treated with endovascular stent placement. The remaining 6 cases either refused treatment or only required catheter removal or the treatment was not revealed in publication.7

Conventional surgery could be applied to this patient and would have the advantage of not needing long-term imaging follow-up and long-term antiplatelet therapy, thus limiting future risk of in-stent stenosis or thromboembolism. Open surgery to restore in-line flow and repair of the carotid-jugular fistula could involve sewing in a bypass graft with ligation of the venous fistula connection. The graft could be prosthetic or an autologous vein graft using the adjacent external jugular vein or great saphenous vein.8 Additionally, the fistula could be repaired with end-to-end anastomoses with or without patches.9

Digital subtraction angiogram (DSA) demonstrating occlusion of the proximal left ICA (black arrow) at the site of the knife stab wound with adjacent traumatic AVF with connection to the left IJV (white arrow).

Vertebral artery DSA demonstrating opacification of the basilar artery (black arrow) and posterior communicating artery (white arrow). There is filling of the ICA, demonstrating a retrograde pathway for a flossing attempt. 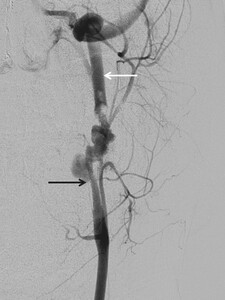 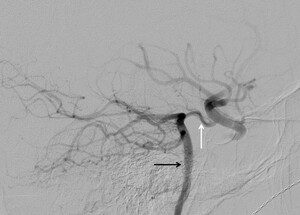 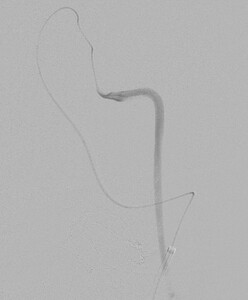 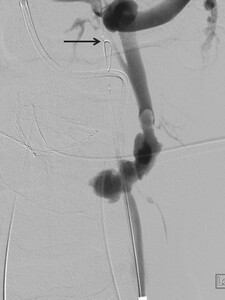 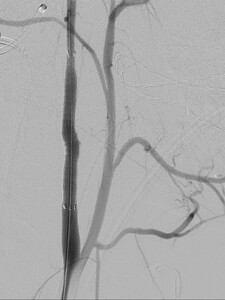