Conditions that can mimic posterior fossa tumors are rare. Their identification is crucial to avoid unnecessary surgical intervention, especially when prompt initiation of medical therapy is critical.

When evaluating patients with possible tumor syndromes, it is important to also consider rarer inflammatory syndromes that can masquerade as neoplasms. Postinfectious hemorrhagic cerebellitis is one such syndrome.

Conditions that can mimic posterior fossa tumors are rare. Their identification is crucial to avoid unnecessary surgical intervention, especially when prompt initiation of medical therapy is critical.

When evaluating patients with possible tumor syndromes, it is important to also consider rarer inflammatory syndromes that can masquerade as neoplasms. Postinfectious hemorrhagic cerebellitis is one such syndrome.

Conditions that can mimic brain tumors or vascular malformations are rare. The appropriate identification of them is crucial to avoid unnecessary surgical intervention, especially when they may respond to medical therapy. In the posterior fossa, acute cerebellitis is an autoimmune inflammatory syndrome that is usually distinguishable from tumoral process by its symmetric bilateral involvement of the cerebellum.1,2 This syndrome predominantly affects children and can occur concurrently with infection, after infection, or after vaccination.1 The typical presentation is with headache, vomiting, and declining level of consciousness in a child; ataxia may also be present.3 Radiographically, T2-weighted magnetic resonance imaging (MRI) reveals bilaterally symmetric cerebellar hyperintensity, cerebellar edema, and possible obstructive hydrocephalus.1 Treatment is with high-dose steroids, and most patients make a full recovery.

Although typically bilateral, acute cerebellitis has been reported to present unilaterally as well and is termed hemicerebellitis.4 Cases of pseudotumoral hemicerebellitis, with symptoms and radiographic features that mimic space-occupying lesions, have also been reported.5–7 Pseudotumoral hemicerebellitis can be challenging to diagnose and treat appropriately because it presents with mass effect suggestive of neoplasm. Cerebellar hemorrhage can also result in mass effect and obstructive hydrocephalus and may be caused by vascular malformations, fistulas, or, rarely, complication of occult neoplasms;8 however, hemorrhage is not a recognized feature of acute cerebellitis.9

In this paper, we report a case of pseudotumoral hemorrhagic cerebellitis with an initial presentation that was highly suggestive of posterior fossa neoplasm, for which we nearly considered surgical intervention. We highlight this case to bring awareness to pseudotumoral syndromes that may be the cause for a patient presenting with symptoms of possible tumor. We also report a review of the literature for other similar cases.

Computed tomography of the brain revealed a left cerebellar hemorrhagic mass–like lesion with temporal horn dilation indicating early hydrocephalus (Fig. 1A), which prompted neurosurgery consultation on day 2. MRI showed vasogenic edema in the left cerebellar hemisphere and vermis with mass effect on the fourth ventricle (Fig. 1B–D). There was no restricted diffusion. There was no solid contrast enhancement, although there was mild foliaform enhancement (Fig. 1E), suggesting a mass or tumor such as pilocytic astrocytoma or other low-grade tumor. Magnetic resonance angiography/magnetic resonance venography showed no aneurysm, high-flow vascular malformation, or dural sinus thrombosis. Susceptibility-weighted imaging confirmed the hemorrhagic nature of the lesion (Fig. 1F).

We involved our hematology-oncology colleagues; however, CSF cytology for abnormal cells was negative, serum alpha-fetoprotein and serum/CSF beta human chorionic gonadotropin were negative, and MRI of the spine demonstrated no drop metastasis.

Given the clinical presentation and imaging findings, we determined with the neuroradiologist that the patient had a postinfectious hemorrhagic cerebellitis. Dexamethasone 0.25 mg/kg was started on day 2 and led to almost immediate clinical improvement with no headache 24 hours after starting the steroids. External ventricular drain (EVD) was considered; fortunately, the patient was stable on observation prior to recognizing the mild hydrocephalus and rapidly responded to medical therapy alone. Dexamethasone was maintained throughout the hospital course and the patient was weaned in the last 2 days.

The patient improved clinically and was hemodynamically stable for discharge after 15 days. On follow-up with our clinic 1.5 months later, the patient had made good recovery and had a normal neurological examination. Follow-up MRI at that time demonstrated complete resolution of the swelling and edema of the cerebellum with small residual chronic hemorrhage but no evidence of hydrocephalus.

We searched PubMed for other cases of hemorrhagic cerebellitis using the terms “hemorrhagic OR hemorrhage” AND “cerebellitis.” We included papers that were published in 2000 and later; were available in English; included adult or pediatric patients; were case reports, case series, or cohort studies; and had hemorrhagic findings on imaging occurring concurrently with cerebellitis.

Our search returned 14 references from PubMed (Fig. 2); 9 papers were excluded based on the above criteria. After reviewing the papers, we decided to exclude 3 more papers that described cases of cerebellar hemorrhage; however, they were associated with recognizable infectious syndromes that did not present any diagnostic conundrum (Plasmodium falciparum,10 Acanthamoeba,11 HSV encephalitis12). The two papers that met inclusion criteria described cases of postinfectious hemorrhagic cerebellitis that presented similarly to our case. Singh et al.9 reported a case of pseudotumoral hemicerebellitis with hemorrhage in a 12-year-old boy presenting with headache, vertigo, rash, cough, and recurrent vomiting who had typhoid fever 2 weeks prior. Bonduelle et al.13 reported a case of acute hemorrhagic leukoencephalitis (AHLE), also known as Weston-Hurst syndrome, with concurrent cerebellar involvement in a 25-year-old woman who presented with ataxia and drowsiness and became comatose shortly after admission and who had an influenza-like illness 3 weeks prior. Data for these reported cases and our current case are summarized in Table 1.

In this report, we describe pseudotumoral hemorrhagic cerebellitis in a 3-year-old who presented with persistent vomiting, headache, and declining level of consciousness. In our review of the literature, we found two other cases of postinfectious hemorrhagic cerebellitis.9,13 The patients were young in all cases (ranging from 3 to 25 years in age) and pediatric in both cases of isolated cerebellitis with hemorrhage. Headache, persistent vomiting, and declining level of consciousness were common symptoms in the pediatric cases; these presenting symptoms were also common to pseudotumoral hemicerebellitis without hemorrhage described in the review by Vivekanandan et al.5

MRI findings were similar between our case and that of Singh et al.,9 both appearing pseudotumoral, with unilateral hyperintensity of MRI T2 and fluid-attenuated inversion recovery, cerebellar edema, herniation, and resulting hydrocephalus. Again, these radiographic findings were similar to those reported in pseudotumoral hemicerebellitis without hemorrhage.14 The similarities in presenting symptoms, clinical course, radiographic findings, and outcome suggest that pseudotumoral hemicerebellitis and hemorrhagic cerebellitis may be due to the same underlying autoimmune mechanisms.

In our case, the patient responded well to steroid therapy alone and made a complete recovery without the need for temporary CSF diversion or surgical decompression. In the case reported by Singh et al.,9 the patient also received an EVD for ascending transtentorial herniation and hydrocephalus. Similarly, EVD has been used to manage hydrocephalus in other cases of cerebellitis.15,16 In deciding whether steroids alone will be adequate or if CSF diversion is also necessary, we suggest considering the severity of CSF obstruction, hydrocephalus, and clinical decline. In our case, the fourth ventricle remained patent and hydrocephalus was mild, leading us to pursue conservative management.

Of interest, our patient was admitted with low-normal platelet count (166,000/mm3) and was thrombocytopenic throughout his stay, with platelets as low as 54,000/mm3 and with brief response to platelet transfusion. Interestingly, Singh et al. also reported low platelets (110,000/mm3) in their patient with pseudotumor hemicerebellitis with hemorrhage. Other reports of pseudotumoral hemicerebellitis have not reported platelet levels or the presence of thrombocytopenia. It is possible that involvement of platelets in the autoimmune response may be related to the hemorrhagic variant that we report, distinguishing it from pseudotumoral hemicerebellitis.

While we include the AHLE case with concurrent cerebellar hemorrhage reported by Bonduelle et al., it differed from our case (and cases of pseudotumoral hemicerebellitis for that matter) in that the patient was a young adult, had a longer stay, and experienced a more difficult recovery. Furthermore, MRI findings with the case reported by Bonduelle et al. demonstrated symmetric bilateral involvement that was not suggestive of neoplasm. Similar to how AHLE may be regarded as a hemorrhagic variant of acute disseminated encephalomyelitis (ADEM),17 one could hypothesize that hemorrhagic cerebellitis may be a more severe hemorrhagic variant of cerebellitis. This may just be a contrast of convenience, however, because we have not observed any trend to suggest that hemorrhagic cerebellitis has poorer outcomes than cerebellitis in the manner that AHLE has poorer outcomes than ADEM.

This may be the first reported case of hemorrhagic postinfectious cerebellitis associated with COVID-19; however, several cases of cerebellitis without hemorrhage have already been reported in association with SARS-CoV-2.18–20 SARS-CoV-2 has known neurotropism with a variety of manifestations,21,22 including but not limited to acute hemorrhagic necrotizing encephalitis,23 stroke,24 multisystemic inflammatory syndrome in children,25,26 cerebellar ataxia,27 and acute cerebellitis.18–20 It does not come as a surprise that SARS-CoV-2 may play some role in the development of cerebellitis, but whether the hemorrhagic variety that we are reporting is more likely with COVID-19 versus other viral or bacterial infections will likely remain an unanswered question.

While acute cerebellitis is easily discerned by its bilaterally symmetric presentation, pseudotumoral hemicerebellitis with or without hemorrhage can be a diagnostic challenge in patients who present with symptoms suggesting a posterior fossa tumor.

Radiographically, our case presented with many MRI features suggesting a tumor: a unilateral cerebellar lesion, involvement of the vermis, and associated edema and mass effect causing hydrocephalus. In fact, the initial impression of our radiologist was that infiltrative or low-grade tumors could be diagnostic considerations, despite the lack of any obvious solid mass enhancement. Although uncommon, hemorrhage may occur in 8% of pilocytic astroctyomas.28 The additional finding of hemorrhage in our case adds to the ruse of pseudotumoral cerebellitis; however, as discussed in previously reported cases, specific features that may differentiate pseudotumoral cerebellitis from tumors include the lack of a well-defined nodular lesion14 and foliaform enhancement along the cerebellar folia (Fig. 1E).6,14

As we evaluate patients with possible tumor syndromes, it is important that we also consider infrequently seen inflammatory syndromes that can masquerade as neoplasms. Postinfectious hemorrhagic cerebellitis is one such syndrome that may present with clinical symptoms and radiographic findings that suggest a cerebellar tumor. Correct diagnosis of this imposter syndrome can prevent unnecessary surgical intervention, especially when conservative management with high-dose steroids alone is likely to result in complete recovery.

Literature review. PubMed was searched using (“hemorrhagic” OR “hemorrhage”) AND “cerebellitis,” and articles were screened by the primary author. The following inclusion criteria (determined a priori) were included: (1) published after January 1, 2000, and available in English; (2) included adults or pediatric patients; (3) were case reports, case series, or cohort studies; and (4) had hemorrhagic findings on imaging occurring concurrently with cerebellitis. After reviewing the references, an additional three papers were excluded because they described cases of cerebellar hemorrhage associated with recognizable infectious syndromes. 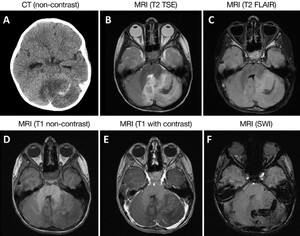