Search for other papers by Alexander A. Gatskiy in
Current site
jns
Google Scholar
PubMedClose
MD, PhD
,
Ihor B. Tretyak
Ihor B. TretyakRestorative Neurosurgery Department, and

The authors report a successful case of Acc reconstruction 5 months after the injury with the anterior C3 levator scapulae motor nerve branch transfer in omotrapezoid triangle of the neck.

The advantages of the proposed technique over preexisting nerve transfers were discussed. We believe that this technique can be considered as an alternative to already existing techniques for proximal injuries to Acc.

The authors report a successful case of Acc reconstruction 5 months after the injury with the anterior C3 levator scapulae motor nerve branch transfer in omotrapezoid triangle of the neck.

The advantages of the proposed technique over preexisting nerve transfers were discussed. We believe that this technique can be considered as an alternative to already existing techniques for proximal injuries to Acc.

Most injuries to the spinal accessory nerve (Acc) occur due to its iatrogenic laceration during the dissection of retrosternocleidomastoid lymph nodes of the neck.1 Both branches to the sternocleidomastoid (SCM) and trapezius muscles (TrM) are susceptible to injury, and only a nonfunctioning TrM can cause mild to severe scapular dysfunction (altered kynematics includes loss of rotation, retraction, and elevation), which is reflected in drooping of the shoulder, stiffness of the shoulder girdle, limited shoulder abduction, etc.2–4 and is accompanied by shoulder and upper arm pain.5 The clinical presentation of the severity of Acc injury differs from patient to patient because the TrM may also receive contributions from the cervical plexus or its malfunction may be partially compensated for preserved rhomboid and levator scapulae muscles.6 These factors in most cases contribute to a delay in both surgical exploration and further reconstruction. The average delay from injury to surgery ranges from days to months7,8 and affects the reconstruction strategy itself. Early recognition of injury and site exploration is usually followed by direct end-to-end repair of Acc.4,9 Acc reconstruction at later stages, due to retraction and neuroma formation within the proximal stump, requires graft interposition.4,9 The outcomes of either suturing or grafting of the Acc remain debatable.1 As the tendencies of the last decade in peripheral nerve surgery have shown a drift toward nerve transfers,10 several justified options to avoid whether suturing or grafting of the injured Acc have become available: nerve transfer of the lateral or medial pectoral nerves, pectoral fascicles of the middle trunk of the brachial plexus.11,12 The reported outcomes of these nerve transfers were equal to or superior to those obtained with classic reconstruction strategies.11,12

A 33-year-old left-handed female was admitted to our department with atrophy and loss of function of the left TrM 5 months after diagnostic excision of the retrosternocleidomastoid lymph node. Two weeks after surgery she acknowledged loss of left SCM function, mild pain, and minor abduction restriction in left shoulder. The patient received standard oral medications to reduce shoulder pain. Because histopatholgy revealed no malignancy in lymph node biopsies, she started to receive physiotherapy. Three months after the primary surgery, the patient noted progressive decrease in left TrM mass, severe restriction of shoulder abduction above the horizontal plane, and scapula winging. Electrophysiological (EMG) study revealed complete injury to the left pars sternocleidomastoideus nervi accessorii (Acc[SCM]) and partial injury to pars trapezius nervi accessorii (Acc[TrM]). She continued her rehabilitation with no functional improvement within the next 2 months. On physical examination, she was found to have left scapular winging and arm abduction limited to approximately 90°. EMG studies showed a complete proximal injury to the left Acc without evidence of reinnervation of the TrM and SCM. The potential need to harvest a sural or lateral antebrachial cutaneous nerve graft, which she identified as highly undesirable due to cosmetic issues, was discussed with the patient.

The patient was positioned supine on the operating room table with her head rotated to the right, with a silicone pad between scapulas to provide hyperextension in the cervical spine. A Z-shaped incision was performed in the left omotrapezoid triangle (Fig. 1) of the neck, limited anteriorly with the posterior margin of the upper one-third of the SCM, posteriorly, with the anterior margin of the pars descendens of TrM, caudally, with the bellies of omohyoid muscle (Fig. 1).

The identification of the proximal stump of the Acc main trunk required myotomy of the SCM in its upper one-third. The proximal stump of the Acc main trunk was identified 2 cm proximal to the mandibullar angle (Fig. 1), mobilized, and complete anatomical injury to Acc was confirmed. Distal stump of Acc(TrM) was identified on the anterior surface of the pars descendens of TrM. During the mobilization of the distal stump of Acc(TrM), functional (evoked with electrical stimuli of 0.1–0.2 mA contraction of TrM) interconnections with the muscular branches of the cervical plexus were revealed. The gap between the proximal stump of the Acc main trunk and the distal stump of Acc(TrM) exceeded 5 cm. Nervus transversus coli was identified at its exit in the punctum nervosum from behind the middle third of SCM (Fig. 1), followed toward foramen intervertebrale between the second and third vertebrae. The anterior branches of the C3 spinal nerve were dissected, n. auricularis magnus and n. transversus coli were identified anatomically, functional muscular branches to MLAS were identified with electrical stimuli of 0.1–0.2 mA. Anterior branch of the C4 spinal nerve, its derivates, n. phrenicus, supraclavicular cutaneous nerves and additional branches to MLAS, were identified both anatomically and with electrical stimuli of 0.1–0.2 mA. The muscular branch to MLAS from the anterior C3 was dissected within its muscle mass, transected—donor nerve. The function of MLAS was preserved, mediated by the remaining motor branch from the anterior C4. The donor nerve was transferred to a distal stump of Acc(TrM), the anastomosis was performed with the help of microscopic magnification (5–8×) with 9/0 nonabsorbable monofilament sutures in a tension-free manner. A schematic representation of the procedure is shown in Fig. 2.

Follow-up examinations of this patient were conducted at 6 and 15 months after reconstruction. EMG studies performed at 15 months showed reinnervation of both the pars ascendens and pars descendens of TrM, both portions of TrM were highly functional, and only a small difference in muscle mass was evident compared to the right side (Fig. 3). There were no restrictions in shoulder abduction and only mild scapula winging was present.

In this article we present a novel nerve transfer using the C3 levator scapulae motor nerve branch that could potentially become an alternative to other preexisting nerve transfer techniques in the event of a spinal accessory nerve injury.11,12 We believe this approach has four main advantages over other preexisting techniques: (1) a single skin incision within the borders of the omotrapezoid triangle, which minimizes the scar length compared to preexisting techniques, which also required exposure of donor nerves in the omoclavicular triangle; (2) the relatively close disposition of the donor and acceptor nerves compared to preexisting techniques, which does not require additional mobilization of the distal stump of the Acc, which could possibly exclude a certain amount of fascicles to the most proximal components of the pars descendens of TrM, hence, make their regeneration impossible; (3) the innervation pattern (anterior C3 and C4) of MLAS allows preserving its functioning and avoiding additional instability of the medial aspect of the scapula; and (4) it is well known that any nerve transfer requires specific reeducation in postoperative period. The closer the function of the donor nerve (function it provides) to the acceptor nerve, the easier it becomes to reeducate the patient. Hence, the reeducation strategies that were described for preexisting nerve transfers required activation of the pectoralis major,11,12 we presume that this can be very challenging in the early stages due to the huge difference in functions mediated by donor and acceptor nerves: adduction vs. abduction of the shoulder. The reeducation after the proposed technique required no specific “trick” movements to activate the reinnervated TrM due to the similarity of natural motions provided by both MLAS and TrM, and the patient was able to readily learn this.

The proposed novel nerve transfer technique of the anterior C3 levator scapulae motor nerve branch, in the event of a spinal accessory nerve injury, improved the scapular stability, greatly improved the scapular winging and helped reduce shoulder and upper arm pain. We believe this technique can be considered as an alternative to preexisting methods in cases of proximal injuries to Acc. 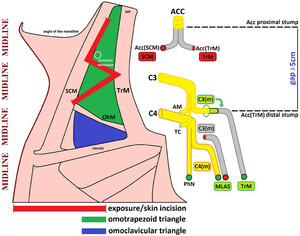 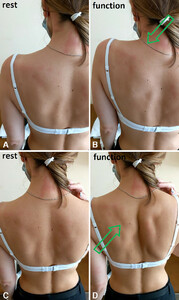