Object. Leukocyte—endothelial cell interactions occurring in the first hours after subarachnoid hemorrhage (SAH) initiate changes in the endothelium and vessel wall that lead to an influx of leukocytes and the development of chronic vasospasm days later. Upregulation of intercellular adhesion molecule—1 (ICAM-1), also called CD54, appears to be a crucial step in this process. There is increasing experimental evidence that blocking the interaction between ICAM-1, which is expressed on endothelium, and integrins such as lymphocyte function—associated antigen—1 (CD11a/CD18) and macrophage antigen—1 (complement receptor 3, CD11b/CD18), which are expressed on the surface of leukocytes, prevents not only inflammation of vessel walls but also chronic vasospasm. The authors extend their previous work with monoclonal antibody (mAb) blockade of leukocyte migration to a nonhuman primate model of chronic, posthemorrhagic cerebral vasospasm.

Methods. Before surgery was performed, six young adult male cynomolgus monkeys underwent baseline selective biplane common carotid and vertebrobasilar artery cerebral angiography via a transfemoral route. On Day 0, a right frontosphenotemporal craniectomy was performed with arachnoid microdissection and placement of 2 to 3 ml of clotted autologous blood in the ipsilateral basal cisterns. The animals were given daily intravenous infusions of 2 mg/kg of either a humanized anti-CD11/CD18 or a placebo mAb beginning 30 to 60 minutes postoperatively. The monkeys were killed on Day 7 after a repeated selective cerebral angiogram was obtained. The area of contrast-containing vessels observed in each hemisphere on anteroposterior angiographic views was calculated for the angiograms obtained on Day 7 and expressed as a percentage of the area on baseline angiograms (percent control areal fraction). Review of flow cytometry and enzyme immunoassay data confirmed the presence of the anti-CD11/CD18 antibody in the serum and bound to leukocytes in the peripheral blood of treated animals. Comparisons of the groups revealed 53 ± 4.8% control vascular areal fraction in the placebo group (two animals) and 95.8 ± 9.4% in the anti-CD11/CD18—treated group (three animals), a statistically significant difference (p = 0.043, t-test).

Conclusions. These results show that blockade of leukocyte migration into the subarachnoid space by an anti-CD11/CD18 mAb is effective in preventing experimental cerebral vasospasm in nonhuman primates, despite the unaltered presence of hemoglobin in the subarachnoid space. These experimental data support the hypothesis that inflammation plays a role in cerebral vasospasm after SAH. 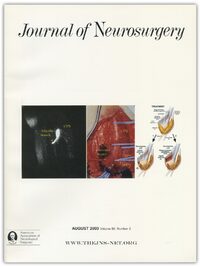