Methods. In 21 adult patients with suspected recurrent metastatic brain tumor or radiation injury, MET-PET scans were obtained. These patients had previously undergone stereotactic radiosurgery and subsequent contrast-enhanced magnetic resonance (MR) examinations before nuclear medicine imaging. Positron emission tomography images were obtained as a static scan of 10 minutes performed 20 minutes after injection of 370 MBq of MET. On MET-PET scans, the portion of the tumor with the highest accumulation of MET was selected as the region of interest (ROI), and the ratio of tumor tissue to normal tissue (T/N) was defined as the mean counts of radioisotope per pixel in the tumor divided by the mean counts per pixel in normal gray matter. The standardized uptake value (SUV) was calculated using the same ROI in the tumor. The accuracy of the MET-PET scan was evaluated by correlating findings with results of subsequent histological analysis (11 cases) or, in cases in which surgery or biopsy was not performed, with subsequent clinical course and MR imaging findings (10 cases).

Histological examinations performed in 11 cases showed viable tumor cells with necrosis in nine and necrosis with no viable tumor cells in two. Another 10 cases were characterized as radiation necrosis because the patients exhibited stable neurological symptoms with no sign of massive enlargement of the lesion on follow-up MR images after 5 months. The mean T/N was 1.15 in the radiation necrosis group (12 cases) and 1.62 in the tumor recurrence group (nine cases). The mean SUV was 1.78 in the necrosis group and 2.5 in the recurrence group. There were statistically significant differences between the recurrence and necrosis groups in T/N and SUV. Furthermore, the borderline T/N value was 1.42 according to a 2 × 2 factorial table (high T/N or low T/N, recurrence or necrosis). From this result, the sensitivity and specificity of MET-PET scanning in detecting tumor recurrence were determined to be 77.8 and 100%, respectively.

Conclusions. The use of MET-PET scanning is a sensitive and accurate technique for differentiating between metastatic brain tumor recurrence and radiation necrosis following stereotactic radiosurgery. This study reveals important information for creating strategies to treat postradiation reactions. 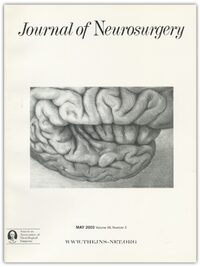