Complex tumors of the glomus jugulare: criteria, treatment, and outcome

Object. Tumors of the glomus jugulare are benign, slow-growing paragangliomas. Their natural history, surgical treatment, and outcome have been well addressed in the recent literature; however, there remains a subgroup of complex tumors—multiple, giant, malignant, neuropeptide-secreting lesions, and those treated previously by an intervention with an adverse outcome—that is high risk, presents surgical challenges, and is associated with treatment controversy. In this article the authors report on a series of patients with complex glomus jugulare tumors and focus on treatment decisions, avoidance of complications, surgical refinements, and patient outcomes.

Methods. In this retrospective study, the patient population was composed of 11 male and 32 female patients (mean age 47 years) with complex tumors of the glomus jugulare who were treated by the senior author within the past 20 years. These include 38 patients with giant tumors, 11 with multiple paragangliomas (seven bilateral and four ipsilateral), two with tumors that hypersecreted catecholamine, and one with a malignant tumor. Six patients had associated lesions: one dural arteriovenous malformation, one carotid artery (CA) aneurysm, two adrenal tumors, and two other cranial tumors.

All but one patient presented with neurological deficits. Cranial nerve deficits, particularly those associated with the lower cranial nerves, were the prominent feature. Twenty-eight patients underwent resection in an attempt at total removal, and gross-total resection was achieved in 24 patients. Particularly challenging were cases in which the patient had undergone prior embolization or CA occlusion, after which new feeding vessels from the internal CA and vertebrobasilar artery circulation developed.

The surgical technique was tailored to each patient and each tumor. It was modified to preserve facial nerve function, particularly in patients with bilateral tumors. Intrabulbar dissection was performed to increase the likelihood that the lower cranial nerves would be preserved. Each tumor was isolated to improve its resectability and prevent blood loss. No operative mortality occurred. In one patient hemiplegia developed postoperatively due to CA thrombosis, but the patient recovered after an endovascular injection of urokinase. In four patients a cerebrospinal fluid leak was treated through spinal drainage, and in five patients infection developed in the external ear canal. Two of these infections progressed to osteomyelitis of the temporal bone. There were two recurrences, one in a patient with a malignant tumor who eventually died of the disease.

Conclusions. Despite the challenges encountered in treating complex glomus jugulare tumors, resection is indicated and successful. Multiple tumors mandate a treatment plan that addresses the risk of bilateral cranial nerve deficits. The intrabulbar dissection technique can be used with any tumor, as long as the tumor itself has not penetrated the wall of the jugular bulb or infiltrated the cranial nerves. Tumors that hypersecrete catecholamine require perioperative management and malignant tumors carry a poor prognosis. 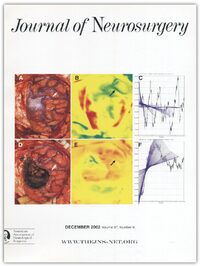