Object. The aim of this study was to investigate the effect of patient-related factors, extent of surgery, and adjuvant therapy on survival in children presenting with intracranial ependymoma.

Methods. Between 1980 and 1999, 83 children (mean age 36 months) underwent surgery for intracranial ependymomas. Complete resection, verified on postoperative computerized tomography scans, was achieved in 73%. Adjuvant therapy modalities have changed over the years: before 1990 all patients received radiotherapy, whereas after 1990 the children younger than 3 years of age and later those younger than 5 years of age were treated first with chemotherapy and received radiotherapy only after their first tumor recurrence. The follow-up period averaged 70 x 49 months.

Conclusions. Overall survival, intraoperative deaths excluded, was 73 ± 11% and 51 ± 14% at 5 and 10 years, respectively. The event-free survival rate at 5 and 10 years was 48 ± 12% and 46 ± 12%, respectively. Most of the events were local recurrences. Despite multiple reinterventions, the overall survival rate in this group dropped to 14%. On univariate analysis, the only significant prognostic factors were complete resection and radiotherapy. Both of these factors combined increased the 5- and 10-year survival rates to 93 and 75%, respectively. Age of the patients was not a statistically independent prognostic factor. The patients in the chemotherapy group did not fare as well as those in the radiotherapy group. A subgroup (36%) within the chemotherapy group, however, survived tumor free after a mean follow-up period of 67 months. It is not clear whether this subgroup either responded well to chemotherapy or needed no adjuvant therapy. Further research is warranted to answer this question. 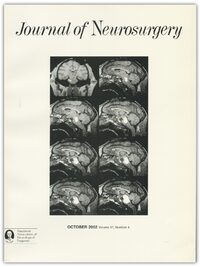