Object. The aim of this study was to investigate potential episodes of cerebral ischemia during surgery for large and complicated aneurysms, by examining the effects of arterial temporary clipping and the impact of confounding variables such as blood pressure and cerebrospinal fluid (CSF) drainage.

Methods. Brain tissue PO2, PCO2, and pH, as well as temperature and extracellular glucose, lactate, pyruvate, and glutamate were monitored in 46 patients by using multiparameter sensors and microdialysis. Baseline data showed that brain tissue PO2 decreased significantly, below a mean arterial pressure (MAP) threshold of 70 mm Hg. Further evidence of its relationship with cerebral perfusion pressure was shown by an increase in mean brain tissue PO2 after drainage of CSF from the basal cisterns (Wilcoxon test, p < 0.01). Temporary clipping was required in 31 patients, with a mean total duration of 14 minutes (range 3–52 minutes), causing brain tissue PO2 to decrease and brain tissue PCO2 to increase (Wilcoxon test, p < 0.01). In patients in whom no subsequent infarction developed in the monitored region, brain tissue PO2 fell to 11 mm Hg (95% confidence interval 8–14 mm Hg). A brain tissue PO2 level below 8 mm Hg for 30 minutes was associated with infarction in any region (p < 0.05 according to the Fisher exact test); other parameters were not predictive of infarction. Intermittent occlusions of less than 30 minutes in total had little effect on extracellular chemistry. Large glutamate increases were only seen in two patients, in both of whom brain tissue PO2 during occlusion was continuously lower than 8 mm Hg for longer than 38 minutes.

Conclusions. The brain tissue PO2 decreases with hypotension, and, when it is below 8 mm Hg for longer than 30 minutes during temporary clipping, it is associated with increasing extracellular glutamate levels and cerebral infarction. 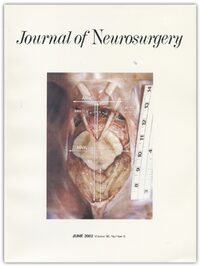