Is stagnating flow in former feeding arteries an indication of cerebral hypoperfusion after resection of arteriovenous malformations?

Object. The authors' goal in this study was to challenge the proposed mechanism of the occlusive hyperemia theory, in which it is asserted that stagnating flow in the former feeding arteries of cerebral arteriovenous malformations (AVMs) leads to parenchymal hypoperfusion or ischemia, from which postoperative edema and hemorrhage originate.

Methods. Cortical oxygen saturation (SaO2) was measured in 52 patients by using microspectrophotometry in areas adjacent to AVMs before and after resection. The appearance of the former feeding arteries was categorized as normal (Group A); moderately stagnating (Group B); and excessively stagnating (Group C) on postoperative angiographic fast-film series. Patients and SaO2 values were pooled accordingly and compared using analysis of variance and Duncan tests (p < 0.05). Angiographic stagnation times in former feeding arteries were correlated in a linear regression/correlation analysis with SaO2 data (p < 0.05). All values are given as the mean ± standard deviation.

Conclusions. Stagnating flow in former feeding arteries does not cause cortical ischemia, but its presence on angiographic studies is usually indicative of hyperperfusion in the surrounding brain tissue after AVM resection. In the context of the pathophysiology of AVMs extrapolations made from angiographically visible shunt flow to blood flow in the surrounding brain tissue must be regarded with caution. 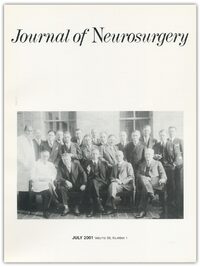