Object. Slow and rhythmic oscillations in intracranial pressure (ICP), also known as B waves, have been claimed to be one of the best preoperative predictive factors in idiopathic adult hydrocephalus syndrome (IAHS). Definitions of B waves vary widely, and previously reported results must be treated with caution. The aims of the present study were to develop a definition of B waves, to develop a method to estimate the B-wave content in an ICP recording by using computer algorithms, and to validate these procedures by comparison with the traditional visual interpretation.

Methods. In eight patients with IAHS, ICP was continuously monitored for approximately 20 hours. The ICP B-wave activity as a percentage of total monitoring time (B%) was estimated by using visual estimation according to the definition given by Lundberg, and also by using two computer algorithms (Methods I and II). In Method I each individual wave was classified as a B wave or not, whereas Method II was used to estimate the B-wave content by evaluating the B-wave power in 10-minute blocks of ICP recordings.

Conclusions. The two computerized algorithms produced similar results. However, with the amplitude set to 1 mm Hg, Method I yielded the highest correlation with the visual analysis (r = 0.74). At least 5 hours of monitoring time was needed for an acceptable approximation of the B% in an overnight ICP recording. The advantages of using modern technology in the analysis of B-wave content of ICP are obvious and these methods should be used in future studies. 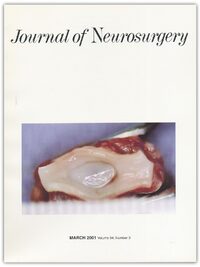