Long-term radiosurgery effects in the treatment of temporal lobe epilepsy

Epilepsy surgery is an effective treatment for medically resistant temporal lobe epilepsy (TLE). To minimize complication rates and potentially improve neuropsychology outcomes, stereotactic radiosurgery (SRS) has been explored as an alternative. Two pilot trials have demonstrated the effectiveness of SRS for the treatment of medically resistant TLE, with seizure-free outcomes for approximately 65% of patients at last follow-up. Despite encouraging results, no conclusive long-term outcomes are available for SRS. This article discusses a single patient who presented with recurrent seizures, worsening headaches, and persistent abnormal MRI findings 7 years and 8 months after SRS.

This 29-year-old woman with a history of medically refractory complex partial seizures since childhood was referred for evaluation. Medical management had failed in this patient. The workup was compatible with left mesial temporal lobe onset, with MRI findings suggestive of mesial temporal sclerosis. In 2003, at the age of 23 years, she underwent Gamma Knife surgery (GKS) targeting the left temporal mesial area with a dose of 24 Gy at the 50% marginal isodose line. After GKS, the patient's seizures decreased in frequency over several months, but auras were persistent. Nine months after treatment, she developed worsening headaches. A follow-up MRI study demonstrated a thick, irregular, enhancing lesion in the medial part of the temporal lobe. She was placed on corticosteroids, with resolution of her headaches.

Her seizures and headaches recurred in March 2010. An MRI study showed a 2.2-cm, ill-defined, enhancing cystic lesion in the left mesial temporal lobe with T2 and FLAIR hyperintensity, which was presumably radiation induced. At that time, the patient opted for left temporal lobe resection to control her seizures. Histological examination showed moderately severe, remote, longstanding sclerosis at the level of the hippocampus. A vascular lesion was identified, and it was most consistent with radiation-induced capillary hemangioma. The entorhinal region was severely damaged, with hemorrhage, necrosis, neuronal loss, astrogliosis, and hemosiderin deposition. There was evidence of radiation vasculopathy.

Radiation-induced lesions after SRS for the treatment of epilepsy are not well documented. Although GKS is a promising technique for the treatment of medically resistant TLE, the ideal candidate is not yet well defined. The selection of the appropriate technical parameters to obtain a desirable functional effect without histological damage to the surrounding neural tissue remains a challenge. This case illustrates the need for long-term follow-up when radiosurgery is used for epilepsy. 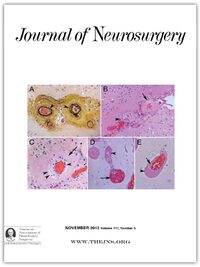