A recurrent cerebral arteriovenous malformation in an adult

Arteriovenous malformations are generally considered to be cured following angiographically proven complete resection. However, rare instances of AVM recurrence despite negative findings on postoperative angiography have been reported in both children and adults. In this paper, the authors present the case of a 33-year-old woman with 2 AVM recurrences. This patient represents the oldest case of recurrent AVM, and the first adult double recurrence reported in the literature. The case is presented, the radiological and surgical features are considered, and the literature on recurrent AVMs is reviewed. 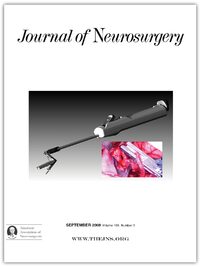