Object. High-frequency stimulation of the subthalamic nucleus (STN) is effective for treating refractory idiopathic Parkinson disease (PD). In stereotactic conditions magnetic resonance (MR) imaging is used by many teams to perform preoperative targeting of the STN. The goal of this study was to analyze and correct the geometrically observed MR imaging acquisitions used for targeting of the STN.

Methods. A dedicated phantom of known geometry was used. The authors calculated existing shifts between measured points and theoretically defined points on the same T1- and T2-weighted sequences used to target the STN. A shifting volume was built to correct the phantom images and images acquired preoperatively in 13 patients with PD. A quantitative study of the correction was conducted using the phantom images and acquisitions acquired in these patients. To quantify the distortion corrections, the authors segmented the lateral ventricles and calculated the overlap of the corrected and uncorrected values between T1 and T2 segmentation.

The authors found that the distortions were greater in the direction of slice selection and frequency encoding and weaker on three-dimensional T1-weighted acquisitions. On T2-weighted acquisitions, the maximum shifts were 2.19 mm in the frequency-encoding direction and 3.81 mm in slice selection. The geometrical distortion was significantly reduced and smaller than pixel size after distortion correction. Assessment of the patients' scans showed that the mean ventricular overlap was 76% before and 94% after correction. 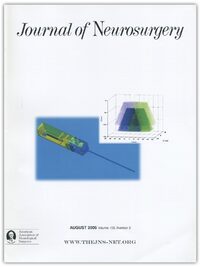