Object. Microvascular decompression (MVD) and percutaneous ablation surgery have historically been the treatments of choice for medically refractory trigeminal neuralgia (TN). Gamma knife surgery (GKS) has been used as an alternative, minimally invasive treatment in TN. In the present study, the authors evaluated the long-term results of GKS in the treatment of TN.

Methods. From 1996 to 2003, 151 cases of TN were treated with GKS. In this group, radiosurgery was performed once in 136 patients, twice in 14 patients, and three times in one patient. The types of TN were as follows: 122 patients with typical TN, three with atypical TN, four with multiple sclerosis—associated TN, and seven with TN and a history of a cavernous sinus tumor. In each case, the chosen radiosurgical target was located 2 to 4 mm anterior to the entry of the trigeminal nerve into the pons. The maximal radiation doses ranged from 50 to 90 Gy. The median age of the patients was 68 years (range 22–90 years), and the median time from diagnosis to GKS was 72 months (range 1–276 months). The median follow up was 19 months (range 2–96 months). Clinical outcomes and postradiosurgical magnetic resonance (MR) imaging studies were analyzed. Univariate and multivariate analyses were performed to evaluate factors that correlated with a favorable, pain-free outcome.

The mean time to relief of pain was 24 days (range 1–180 days). Forty-seven, 45, and 34% of patients were pain free without medication at the 1-, 2-, and 3-year follow ups, respectively. Ninety, 77, and 70% of patients experienced some improvement in pain at the 1-, 2-, and 3-year follow ups, respectively. Thirty-three (27%) of 122 patients with initial improvement subsequently experienced pain recurrence a median of 12 months (range 2–34 months) post-GKS. Among those whose symptoms recurred, 14 patients underwent additional GKS, six MVD, four glycerol injection, and one patient a percutaneous radiofrequency rhizotomy. Twelve patients (9%) suffered the onset of new facial numbness post-GKS. Changes on MR images post-GKS were noted in nine patients (7%). On univariate analysis, right-sided neuralgia (p = 0.0002) and a previous neurectomy (p = 0.04) correlated with a pain-free outcome; on multivariate analysis, both right-sided neuralgia (p = 0.032) and patient age (p = 0.05) were statistically significant. New onset of facial numbness following GKS correlated with undergoing more than one GKS (p = 0.002).

Conclusions. At the last follow up, GKS effected pain relief in 44% of patients. Some degree of pain improvement at 3 years post-GKS was noted in 70% of patients with TN. Although less effective than MVD, GKS remains a reasonable treatment option for those unwilling or unable to undergo more invasive surgical approaches and offers a low risk of side effects. 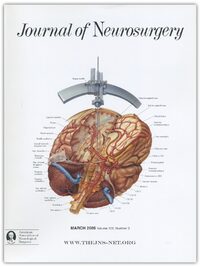