Object. This is a retrospective review of 397 benign and malignant peripheral neural sheath tumors (PNSTs) that were surgically treated between 1969 and 1999 at the Louisiana State University Health Sciences Center (LSUHSC). The surgical techniques and adjunctive treatments are presented, the tumors are classified with respect to type and prevalence at each neuroanatomical location, and the management of malignant PNSTs is reviewed.

Conclusions. The majority of tumors were benign PNSTs from the brachial plexus region. Most of the benign PNSTs in all locations were neurofibromas, with sporadic neurofibromas predominating. Similar numbers of schwannomas were found in the upper and lower extremities, whereas neurofibromas were more prevalent in the upper extremities. Despite aggressive limb-ablation or limb-sparing surgery plus adjunctive therapy, malignant PNSTs continue to be associated with high morbidity and mortality rates. 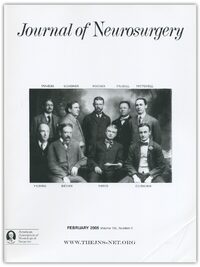