Object. Apoptosis has increasingly been implicated in the pathobiology of traumatic brain injury (TBI). The present study was undertaken to confirm the presence of apoptosis in the periischemic zone (PIZ) of traumatic cerebral contusions and to determine the role of apoptosis, if any, in neurological outcome.

Methods. Brain tissue harvested at Wentworth Hospital from the PIZ in 29 patients with traumatic supratentorial contusions was compared with brain tissue resected in patients with epilepsy. Immunohistochemical analyses were performed on the tissues to see if they contained the apoptosis-related proteins p53, bcl-2, bax, and caspase-3. The findings were then correlated to demographic, clinical, surgical, neuroimaging, and outcome data.

Conclusions. The present findings confirm apoptosis in the PIZ of traumatic cerebral contusions and indicate that this form of cell death can influence neurological outcome following a TBI. 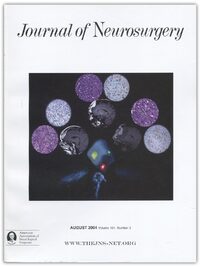